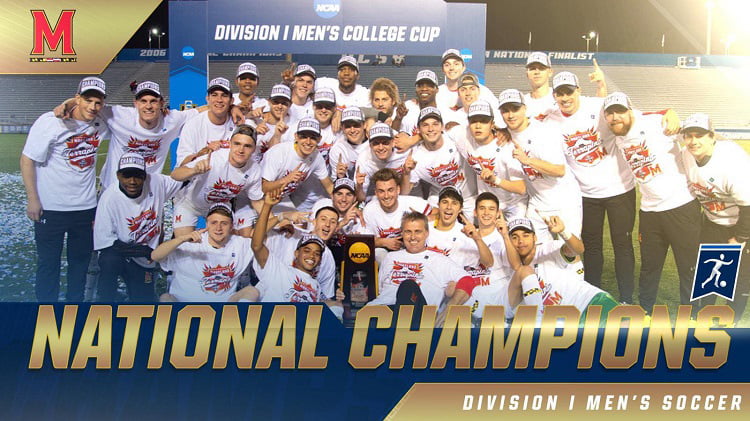 From his beginnings at FC Issy les Moulineaux, four years at the Valenciennes FC academy, William James Hervé created his early career between the Paris region and the North. The former attacking midfielder looks back on his crazy year 2018. From the FFFUSA final in March 2018 to his return from injury, the road has been marked by ups and downs. And, most importantly, by a D1 NCAA title, the elite of American college soccer, in early December.

What was the feeling after that win in 2018? Life in Maryland ?

We went through a lot of rough patches, coming off a tough season. At the beginning of the season, we couldn’t score, people doubted. We showed a strong collective force, between those who played and those who were in the stands. Today, we are all linked to this same thing, it is a beautiful pride.

That’s what Didier Deschamps said after the World Cup.

That’s it, it’s more or less the same feeling. Some people have tattooed the same thing to symbolize victory, but not me. Some players have gone pro, we are in contact with them. We will be brothers until the end. Even if we don’t see each other for a long time, we’ll have won it together.

On this final tournament, you were not favorites…

Not at all… When I joined the team in the summer of 2017, we weren’t ranked among the top universities. It’s just the name, because it’s a good university, which is known for its big soccer team. But there was no success, it was a rebuild after a failure. We had to rebuild a team, a way to play. We didn’t have the idea to win, just to have a good team, we could do great things, we had to get to know each other, then the work would make us go far. Things progressed day by day. When we lost, when we didn’t score, when we were criticized on Twitter, we managed to ignore it, because we knew our time would come. We went through emotions, disappointments, moments when we told ourselves we weren’t going to do it. Then we got closer. We took the games week by week, with the desire to fight together. We put a compact block on the field, it was hard to score against us, everyone was defending, even the forwards, and, because we had a great defense, we had a very formidable team.

If you had to keep a strong game ?

There are several symbolic moments. There was a loss that hurt us, against Wisconsin, on pride night, in the middle of the season. There were a lot of fans there. We lost in overtime. It was a big shock. Then, from that time until the Denver game, we were building. We said we had the best forward in the country on that team, but after we won, it was a wake-up call. We became machines, we all defended together. In the NCAA playoffs, we got a win against Duke, who was considered the best team in the country, we beat Kentucky, who was undefeated at home. Each game was a very strong moment in the conquest of the trophy.

Only you believed in it…

It was complicated to win, we were not favorites. People didn’t think we were going to make it. Only the Maryland fans thought we would. To have won these games, knowing that people considered us weak, is a pride on top of that.

Yes, it’s the best moment, especially after the final whistle, of this very difficult game. There was a lot of fatigue, because the semi-final had been played two days before. It was not the best soccer game, we did not enjoy playing. But, when we scored and at the final whistle, we realized that we were champions. From that moment on, emotions are very strong. It will be very hard to relive it, I had already won championships, in U15, I had lived great emotions with the club of my city, my best friends, but it is not the same story. I started from nothing and I became American champion. It’s a huge trophy for an athlete. It will be my best memory because it was the most emotional and proud moment in my life.

You also got to play in front of your mother…

It was a pure coincidence, during a game against North western. My mother had a trip for work, she doesn’t do it often in the United States. She got to see me play. When you don’t see your family and she comes to see you play, it adds motivation. Plus, it’s a huge pride to have scored two goals. It’s a great feeling to know that she’s proud of you, when she sees you succeed, score. I didn’t want to disappoint her. If I left France, it’s because there was something, I wasn’t sure about. I assumed and made the right choice. I was happy to see the smile on her face and that she was proud that I was her son.

During this season, you were also once voted offensive player of the week in the Big Ten Conference.

That’s flattering and gratifying. It’s a lot of effort I put in. The personal awards are nice, they add visibility, it’s a bonus. I didn’t win a second one. I was also a member of the Freshman NCAA All-Tournament Team. It motivates you to give even more.

Why did you make the choice to join the FFFUSA program ?

I was at the end of my 4th year at Valenciennes, in a phase where I was disappointed. My future was not necessarily there. There is a lot of frustration, and I wasn’t reaching my goals. I was quite ambitious, I didn’t want to let myself be directed by people who told me that maybe it would work out. I followed my destiny, I told myself you have to find something else. I wasn’t happy, I told my friends and family, I said be patient, work. I heard about FFFUSA, I was a fan of the United States, the culture. I found it appealing. I got in touch with Edouard Lacroix and Clément Simonin. I was invited to the final in Clairefontaine. I said to myself, I’m going there to clear my head. I was in a routine. I realized that I didn’t belong in Valenciennes anymore. In the end, I never felt so good, I was free. It allowed me to express myself a lot more, and apparently I liked it. The same evening, I had received offers. My parents told me not to get carried away, that they didn’t know if they were good universities. I was happy, because I had a way out if I wasn’t happy at Valenciennes. I received some interesting offers, including the one from Maryland, which was one of the best I’d ever received. Edouard and all the FFFUSA people said that no Frenchman had gone there and that it was one of the best teams in the USA. You can’t turn it down. I was interested, my parents realized how lucky it was for me. After the process of terminating my apprenticeship contract in Valenciennes, I made the decision to leave.

What has life been like in the United States ?

It’s unique. College life is something that not everyone experiences. I’m very happy to have experienced it. Even college soccer looks professional, with a huge fan base. We are recognized in the universities, in the airports. There are great sports facilities, great school facilities. It’s unique and totally different from what I’ve experienced in my life. I’m very proud and very happy that I made the choice to leave, it was the best fit for me. It’s one of the best choices I’ve made in my life. The first two months, you think it’s different, strange, then, when you know the people, you make friends, you realize how great and beautiful it is. These are emotions as a young sportsman, as an athlete, as a student, that we are looking for.